The Ghostbar Las Vegas is located on the 55th floor of the Palms Tower at the Palms Casino. Little known fact but the club is named after the ghost-shaped lighted panel located on the ceiling above the main bar. Sitting high atop the Vegas Strip, Ghostbar Vegas bottle service reinvents high class. Frequented by the hottest celebrity clientele and the trendiest people in Las Vegas. The innovative décor creates an exclusive ambiance unlike anything you’ve ever seen. Ghostbar Las Vegas however is mostly famous for its view of the entire Las Vegas Strip. This venue was already popular when it was called Ghostbar and it plans to keep that popularity alive.

Ghostbar nightclub has a dramatic outdoor sky deck that offers nearly a 360-degree view of the glittering strip and glass insets in the floors provides a captivating view below. The glass-enclosed balcony provides breathtaking views of the strip and is sure to make you feel like your floating.

For almost a decade Ghostbar Las Vegas bottle service has taken nightlife to the next level with its creative events like Ladies night Wednesdays and GBDC. The newly formed hipster party called Ghostbar Dayclub has been ground breaking event in every sense of the word. This event was the start of the new Las Vegas Dayclub movement for the winter season and is a must see event hosted inside Ghostbar at the Palms.

Ghostbar Las Vegas is currently open to the public weekly Friday-Sunday from 10:30pm-4am. In both Chicago and Las Vegas Ghostbar nightclub is known for playing the best in Top 40/Hip Hop and they have no reason to change that successful pattern any time soon. Ghostbar Las Vegas bottle service is a great option for any weekend or Holiday plans. Often booking well known local acts for weekends nights instead of major talent so bottle deals like buy 1 get 1’s are often approved. Bottles normally start at $350 each with a normal rule of thumb of 1 bottle requirement for every 4ppl with girls mostly being overlooked.

Sadly it’s the season where all the hottest summer pool parties close it’s doors until next season. If you’re still looking for a crazy daytime party…don’t worry because Ghostbar Dayclub will be opening it’s doors just for you in it’s second season. If you haven’t experienced the daytime debauchery that is Palms day club, then you don’t know what you’ve been missing! The world’s only high-energy pinata poppin’, confetti exploding, champagne spilling, cryo gun blasting, sunglass wearing, hot girl girling, 40 oz. brown bagging, hands in the air ‘n like you just not caring, costume rocking, signature cocktail having, 55 floors above the strip being Day Party dubbed Ghostbar Dayclub!

Last year the iconic Ghostbar Las Vegas introduced a new type of uninhibited daytime party, Ghostbar day club, that starts at 1 pm and reaches epic proportions with beer bongs, champagne showers and pinata smashing. Taking place 55 stories above the strip – including the famous patio overlooking Sin City with it’s breath-taking views . Ghostbar Dayclubs balcony will serve as the backdrop for you and your newest, most outlandishly-dressed best friends to party until the sun goes down. Hungry you say? The chefs behind Nove Italiano and N9NE Steakhouse have put together a delightful menu of “sammichez”, complimenting a luxurious specialty cocktail menu. 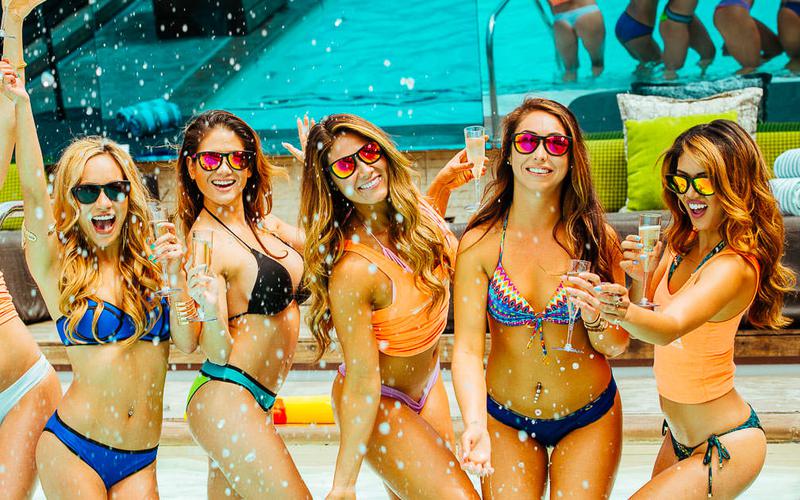